Attending the World Cup is no easy task. From competing with millions of global fans for randomized lottery tickets at 5 AM in the morning to paying for transport, lodging, and entertainment, it takes dedication. And a small fortune.

But as I watch euphoric, emblazoned fans fill the corners of my low-def screen, it’s clear that it’s worth it.

To give you an idea of the actual cost: an all-inclusive package from a middleman vendor starts at $5000 per head. For anyone not a relative of a FIFA higher-up or the pampered staff of an oil company, it is tough going; most hotels and transport options are booked up a year before the first ball hits the turf.

So how’s an average entry-level twenty-something, and those of similar budget, to partake?

Many have opted to save by staying at cheap rooms throughout Rio’s notorious slums, or favelas. As I mentioned in an earlier post about affordable housing and mega-sporting events, these favelas are the hot new spot for budget travelers looking for “authentic” Rio experience.

A room for rent is seen at the Maria Clara dos Santos home and hostel in the Rocinha slum in Rio de Janeiro April 11, 2014. Picture taken April 11, 2014. (REUTERS/Pilar Olivares) – via The Atlantic CityLab

A lounge is seen at the Mirante do Arvrao hotel in the Vidigal slum in Rio de Janeiro March 25, 2014. (REUTERS/Pilar Olivares) via The Atlantic CityLab

Vicente Magalhaes prepares a room to be rented at his home in the Pereira da Silva slum in Rio de Janeiro April 1, 2014. (REUTERS/Pilar Olivares) via The Atlantic CityLab

A driving force for this trend is the new start-up Favela Experience, whose young CEO Elliot Rosenberg, a recently minted graduate from UVA, was inspired with the idea during a summer internship with a social venture capital firm in Brazil. He now lives in the Rocinha favela full time.

To book out rooms, Favela Experience launched an Indiegogo campaign from December to February, drawing in customers with the promise of beach and city views at a third of the price in a “safe, centrally-located, culturally vibrant” neighborhood, and with pristine pictures such as these: 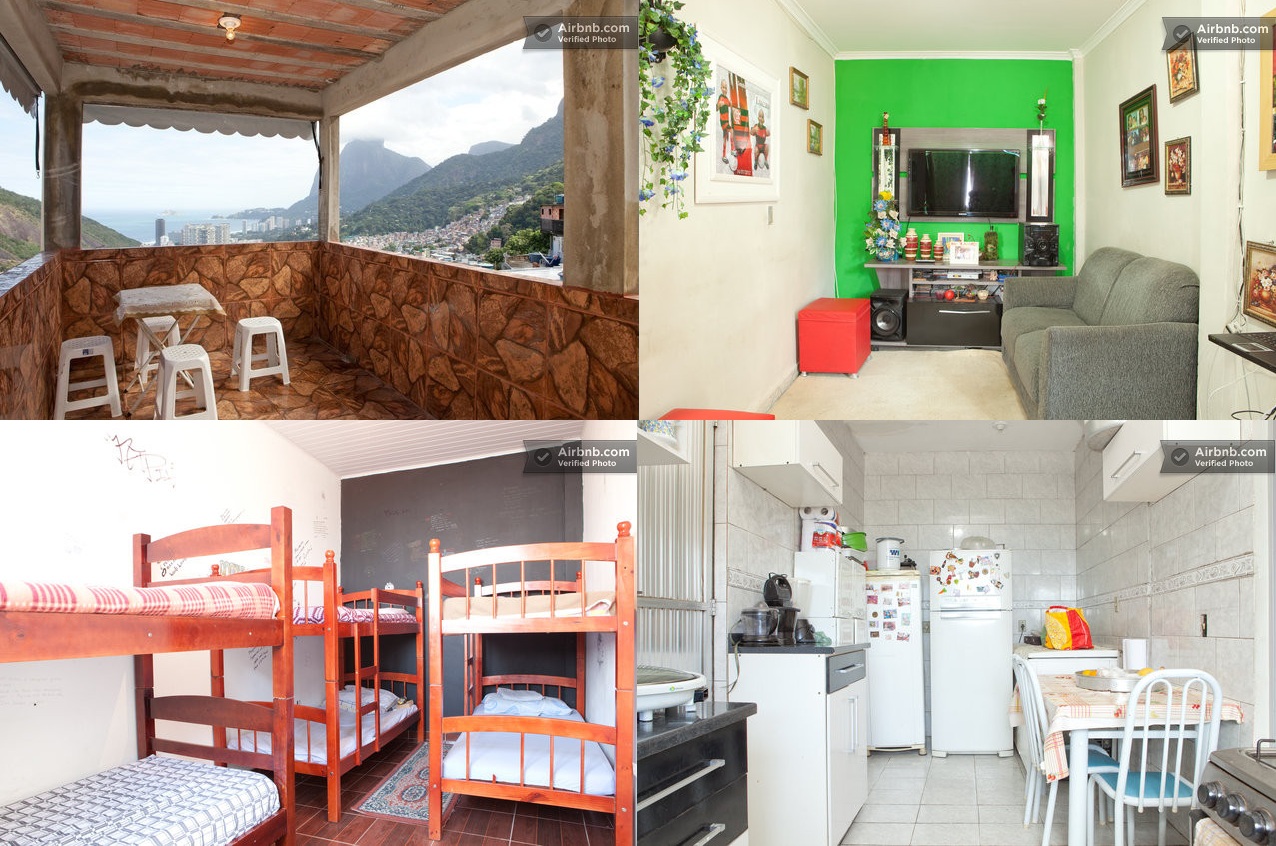 Single bed in a shared guest room for five nights: $250. Via The Favela Experience. 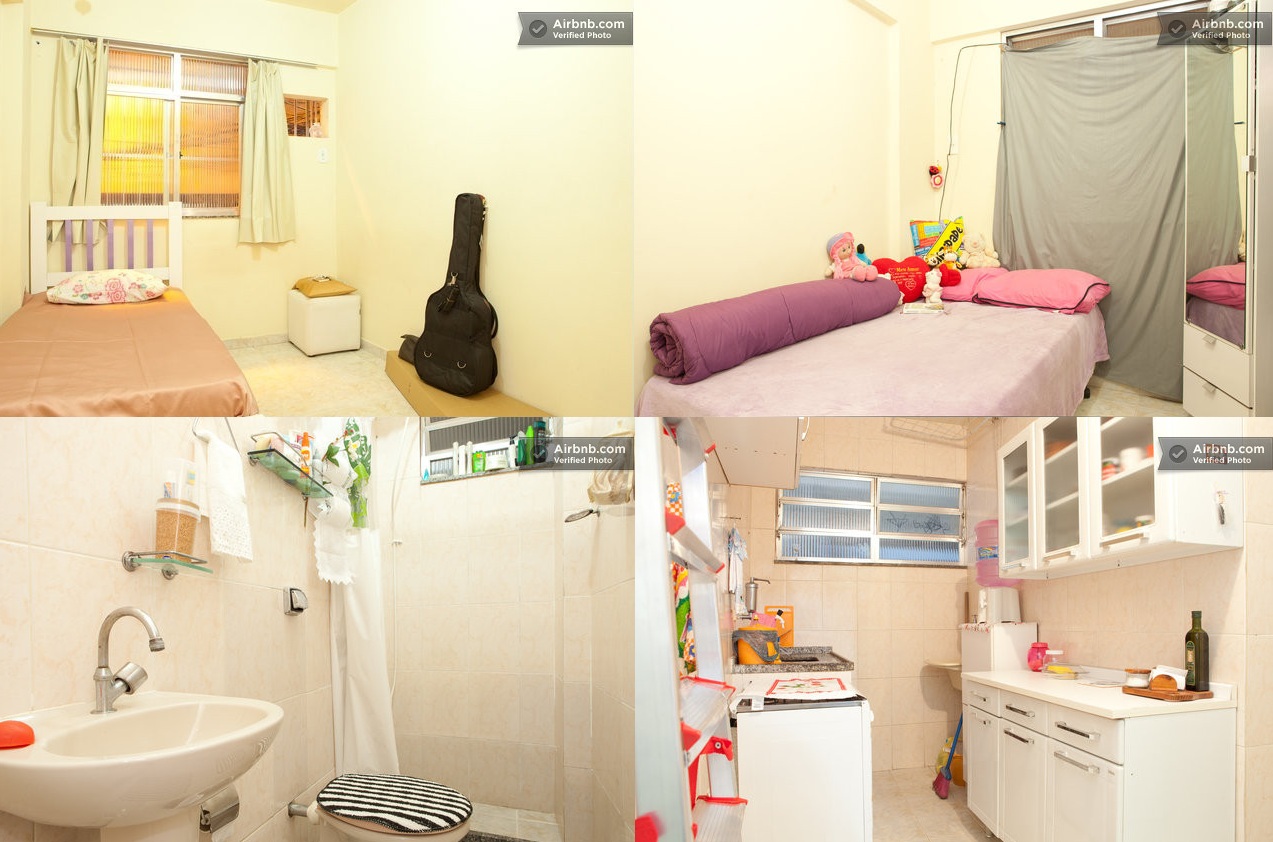 Private studio or one-bedroom apartment for two guests for five nights: $1000. Via The Favela Experience. 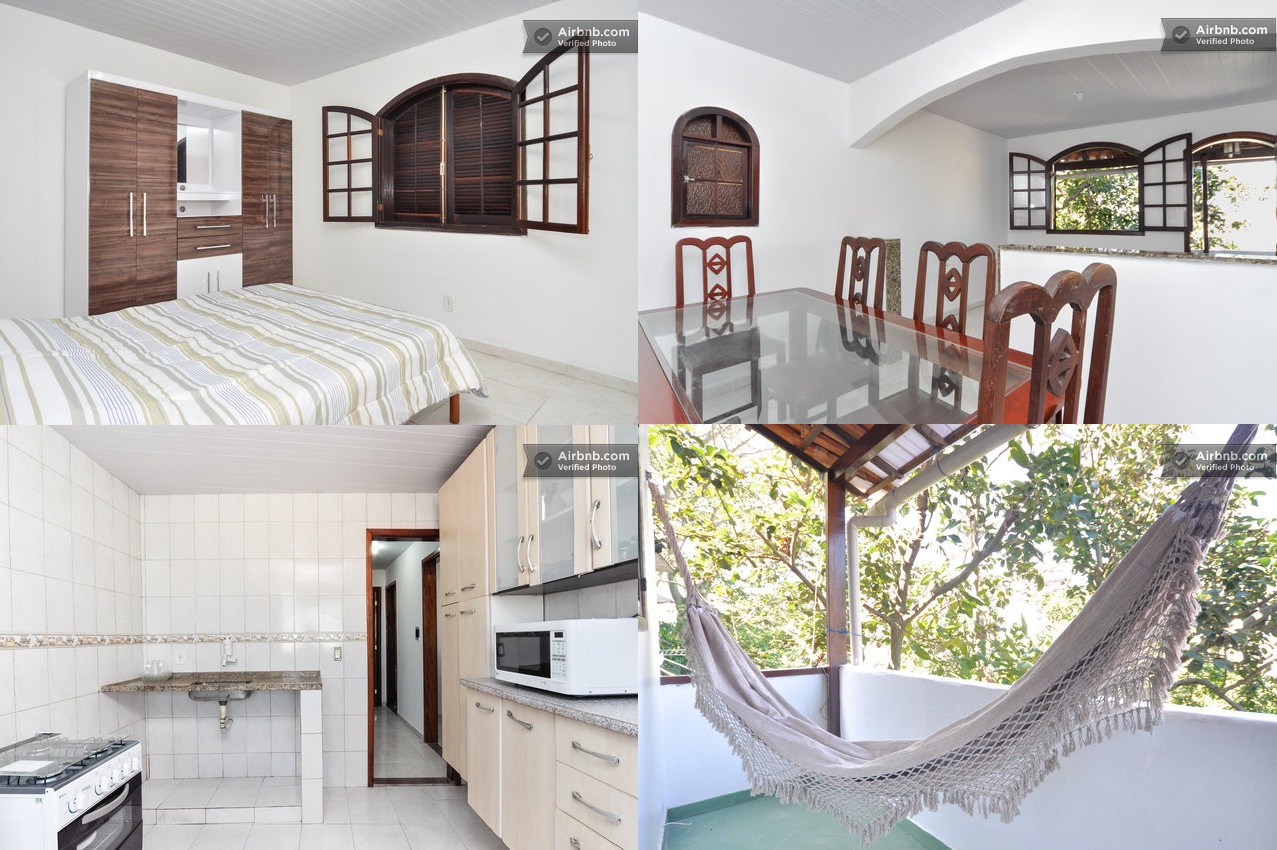 Private two-bedroom apartment for four guests for five nights: $1600. Via The Favela Experience. Am I at an internationally notorious slum or a Caribbean resort?

Contrast this with the Daily Mail’s adjective-heavy sensationalist take on things:

Via The Daily Mail

Who’s got it right? I’m guessing the truth’s somewhere between photoshop and overblown flash.

Favela Experience says their enterprise goes beyond just capitalizing on a supply-demand gap: it’s a model of cultural exchange and economic empowerment that can have a meaningful impact on the lives of favela residents. Sustainable tourism is the strategic tagline here:

Favela Experience uses sustainable tourism as a force for good in favelas and the world. We shun any tourism activities that exploit, misrepresent, or objectify marginalized communities, as many favela tour companies do. Those companies are operated by outsiders who perpetuate negative stereotypes about favelas, dehumanize residents, and do not contribute to local socioeconomic development.

As such, our services are born from our conviction to transform favela tourism in Rio de Janeiro and prove a replicable model of sustainable tourism as an example for similar communities elsewhere. By allowing meaningful and authentic dialogue between favela residents and guests, we show both the positive and challenging realities of life in these communities and do not glamorize poverty in favelas. Ultimately, we practice sustainable tourism because we generate additional income for favela residents, facilitate genuine cultural exchange, break negative stereotypes about favelas, and provide accommodations with low environmental impact.

In all, it is not yet clear what net impact the World Cup and the Olympics will have on the favelas and their residents. The pacification programme – which was cobbled together by the government in anticipation of intense international scrutiny during the country’s double whammy hosting of the World Cup and the Olympics – is credited with introducing key safety and municipal services. Not only that, but by doing this, it has quickly raised the investment value of these neighborhoods:

Today, with several UPP stations set up throughout Vidigal, the area is becoming a full-fledged neighborhood with municipal electricity, waterworks, and national mail service. The pacification program has not only removed the imminent threat of gang violence from the streets and reduced the city’s murder rate, it’s also created a new legion of real-deal slumdog millionaires who suddenly find themselves owning some of the most sought-after land in Rio. (The Daily Beast)

I’m a bit skeptical about that last part: “legion of real-deal slumdog millionaires.” Things like this very rarely work out in favor of the poor. Also, the pacification programme is suffering a host of criticism about police abuse and misplaced priorities.

In the end, the Daily Beast’s assessment of the favelas’ fate seems rather glum:

Only one thing remains certain at the moment: Now may be the last time to experience this unique way of life in Rio before the community gentrifies beyond recognition, or before it succumbs to the clutches of its original drug overlords who are waiting to crawl out from the woodwork and reclaim what they believe is rightfully theirs. (The Daily Beast)

So, either gentrification and cultural annihilation or a drug-slum-lord-dom. Is there no happy medium? I know I’m asking a difficult and perhaps fundamental question here, but how can we preserve what’s good about the favelas, their vibrant social and cultural fabric, while ensuring that standards of living and economic mobility improve?

Also, are you one of the lucky few who made it down to the World Cup and stayed in the favelas? Tell us about your experience in the comments below!